1: The remains or impression of a prehistoric plant or animal that have been hardened into rock

2: An old or outdated person or thing (ouch!)

So clearly we are more interested in the first part of this than the second. If we follow that line of thought, then fossils are the remains of any living thing that has been in the ground long enough that all, or parts of it, have turned into rock. Now that might seem pretty straightforward, but actually sometimes it can be very difficult to tell if you have the remains of a living thing or not – take a footprint for example, it’s the remains of a living creature, but it’s remarkably easy to see a footprint where actually there is just a depression in the rock. 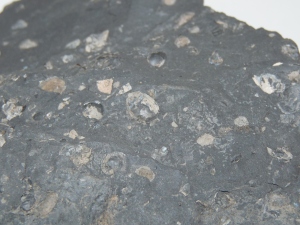 And how do you know that something is even a rock?! It sounds strange, but it can even be tricky to work out if something has been buried long enough to be a fossil!

So here are some basic guidelines:

1. You know you have a rock when you can’t easily wash the dirt off – there may be dirt on top of rock, but if when you have given it a bit of a wash all you have left is just a handful of mud then sorry it’s not been down there long enough.

2. You know you have a rock when all the cavities are filled with either rock or crystal material – take a bone or a shell – if you can see lots of spaces where there is no material filling the gaps, it’s probably not a rock. 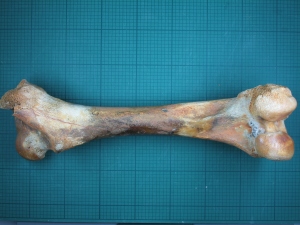 This is a bone that someone thought was a fossil…. 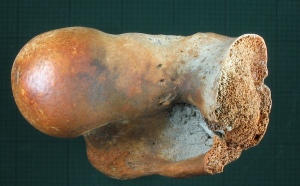 But when you look close up, you can see that the holes are not filled with anything – so this bone is not old enough to be a fossil.

3. Now knowing you have a fossil is trickier – sometimes it’s just a matter of getting your eye in – but usually look for a regular pattern – that is dead giveaway. 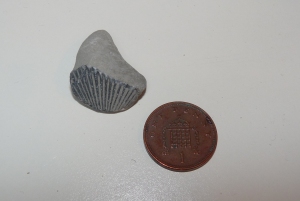 Some patterns are easier to spot than others

Even if you don’t know what it is, spotting a pattern is a good first step. 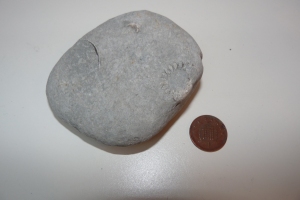 Can you see the fossil in this one? It’s an ammonite – look for the curling shape with lines.

Some things look so strange you might think they are fakes – the stars in this rock are the fossilised stalks of an ancient sea creature!

Some fossils are small or have been fossilised in an unusual way – some of these are on their sides!

4. Most often the most useful thing you can do is look at what kind of fossils are usually found in your area – let’s face it, you’re very unlikely to find a t-rex skull in a garden in Greenwich, but if you know what fossils you should be finding you can work out if yours is more likely to be a fossil.

If you have managed to find a real fossil (well done!) then you have to work out what kind of fossil you have, and to do that you need to look at a geological map, which I’ll talk about next time.

Have a rockin’ day!

P.S. To help you with your own fossil discoveries, here a useful book you can look at:

Dorling Kindersley’s ‘Fossils’ book, last re-printed in 2010 (the link I have included is to Amazon so you can take a look at it, but I would recommend you check it out in your local library first, especially if you are just starting out).

Other good webpages to look at include:

(this post was moved from my old site, so sorry for any inconsistencies)

23 thoughts on “So you think you’ve found a fossil”