Whilst in Vienna I had a number of recommendations as to things that I should try and see during the conference. My mother, the art historian, suggested The Belvedere to see the Klimt paintings. My father, the hospitality expert, suggested visiting a Viennese coffee house. My supervisor, the experienced EGU delegate, suggested the Hundertwasserhaus (knowing that I appreciate interesting architecture). But the sad reality of going to a conference in a new city is that as much as you may want to explore the city itself, there is so much happening at the conference that you can hardly tear yourself away from that one building. That is what happened with me and EGU – with one exception, the Natural History Museum (or Naturhistorisches Museum Wien -NHMW).

A lovely sunny day – to spend in a Museum. Yeah I’m a nerd.

Now as a former employee of the NHM in London I have a strong appreciation for a good museum and the NHMW Vienna had been recommended to me by a few different people. To be honest, if I could only visit one thing in any city – a museum would probably win. So one afternoon, when I had a two hour gap, I hopped on the train to the Museums Quarter. The first thing I noticed was that the building itself was beautiful – but in the process of being cleaned. Half of it, therefore, was obscured by scaffolding. Luckily the museum opposite, the Museum of Art History (or Kunsthistorisches Museum) was uncovered and in a mirror image represented what the NHMW would normally look like. 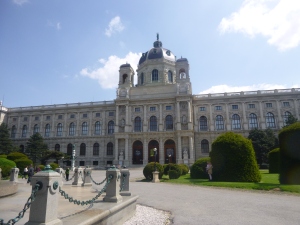 The Museum of Art History

The NHMW was guarded by ths cute little elephant!

It cost €5 to get in (with a student discount) but that included entry to a special exhibition on Extinction. The Museum is divided between two levels, which can roughly divided into Life Sciences upstairs and Earth Sciences downstairs. One of the sections was closed for refurbishment; the human evolution and anthropology galleries, but to be honest, with only two hours, I couldn’t have done them justice anyway.

Below are a few photos to show just some of the brilliant things about this Museum, but there are so many more!

One great thing for me was that most signs were in German and English. 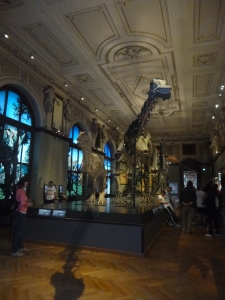 Not quite! Little details actually jumped out at you! 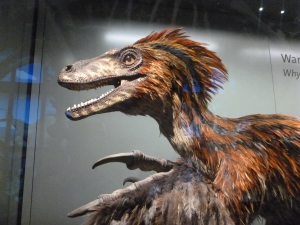 And they get extra points for having a feathered Deinonychus model!

They have beautiful victorian display cabinets…

But even those are not always quite as they seem…

He is getting away!!!

Dioramas were used to fantastic effect…

And objects were placed together that gave you new insight – look at the tiny white brain of this whale!

They even won prizes for their taxidermy and display – who knew you even could!?!

Every part of the building had been thought about. Even the windows were illustrated with microfossil drawings to emphasise their beauty. 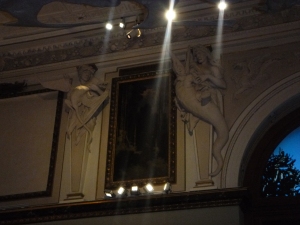 And the figures around the ceiling were just spectacular! And in case you were wondering – yes this does appear to be someone wrestling a pterodactyl next to someone with an icthyosaur tucked under their arm. 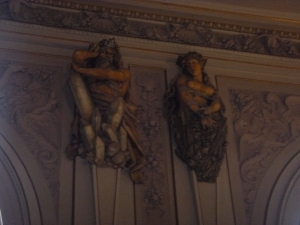 “*sigh* being a figurehead is SO TIRING. I’m just going to lean on this huge crystal conveniently covering my groin…” 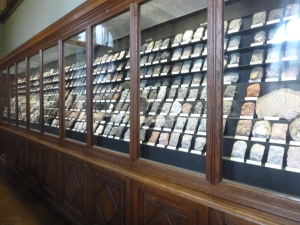 There were so many specimens…

That I simply did not have time to see them all. 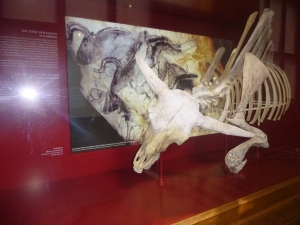 But one thing is clear…. 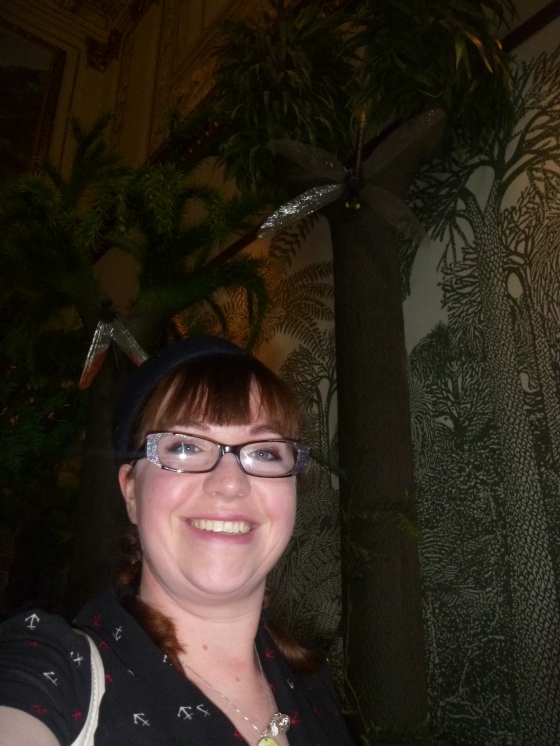 NHMW – I will definitely be back!!!