Day 2 dawned bright and early and the excitement of being here in Vienna got me up and out of bed MUCH quicker than usual. Riding the train to the conference centre is also part of the moment as people wearing the EGU lanyards board at every stop until the whole train feels like it’s full of delegates (sorry to any Viennese residents inconvenienced by our mass exodus).

The first session of my day was on the origin of life – not a small topic to kick off with but one that I had been looking forward to since I had seen it advertised, conjuring up images of Darwin as an astronaut or what he might have discovered if he had been alive today (all paradoxes ignored!). The session, PS8.1/BG8.1 Origin of life and habitability: from early Earth to the Solar System and beyond, although it featured brilliant talks looking at the influence of large impactor events on H2O in the atmosphere and fossilised microbes found in veins of minerals like aragonite, turned out to be more than I could handle scientifically – the topic very quickly went beyond my realm of understanding and though some may argue that this is the fault of the speaker not explaining it well wnough, I know how hard it is to get an easily explained basic concept across in 12 minutes, let alone a concept, methodology and new discovery. So I left that session in search of more informative ground… 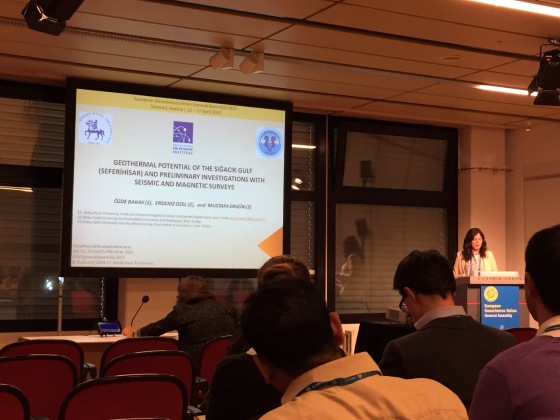 And I found it in ERE3.2 Exloration, development and production of geothermal resources. In this session I learned how scientists are using ambient noise to help image geothermal reservoirs, which means they don’t have to wait for large seismic events or rely on expensive geophysics (though there are problems with the background noise not being uniform), and that hot springs are actually indicators of geothermal potential – which may seem obvious, but you would be surprised how often that obvious is not the case! There were also lots of beautiful maps used to illustrate the many way that we explore for geothermal resources, from bathymetry, to heat flow maps, from gravity to tectonic.

Then I was back in G6 for NH9.5 Natural hazard impacts on technological systems and urban areas and heard a talk on the historical analysis of US pipeline accidents. Pipelines are a big deal for us as many nations rely on oil and gas to run electricity systems and other infrastructure. It was interesting to see the impacts that events such as freezing and hurricanes had on pipelines an to think how this might hurt our energy resources. It was also funny to hear how this was supposed to be a European piece of research, but that they couldn’t find any accidents to analyse! 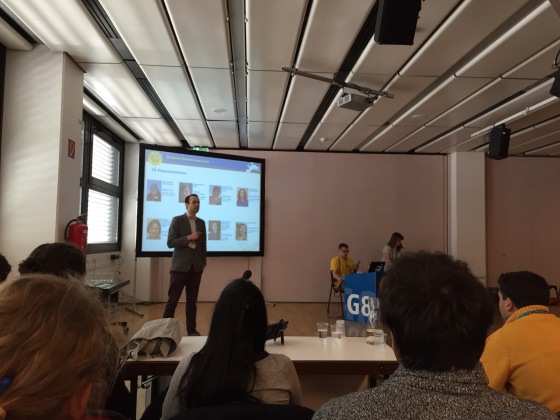 Then it was lunchtime and on to the Young Scientists Forum OM2. I was keen to attend this partly out of interest and partly because as a Social Geoscientist I feel marginalised by the conference as I identify far more strongly with the Education and Outreach Symposia (EOS) than with any of the divisions and as such I am not represented on the council (as EOS is a special event, not a division). It was particularly good to hear that Young Scientists will no longer be called that – because, let’s face it, I’m not young anymore – but will be called Early Careers Scientists instead to reflect the greater diversity of career choices that lead people to become professional scientists. Apart from that we spent the meeting feeding back what could be improved, and if you want to add your two cents, please fill in the survey (available soon). 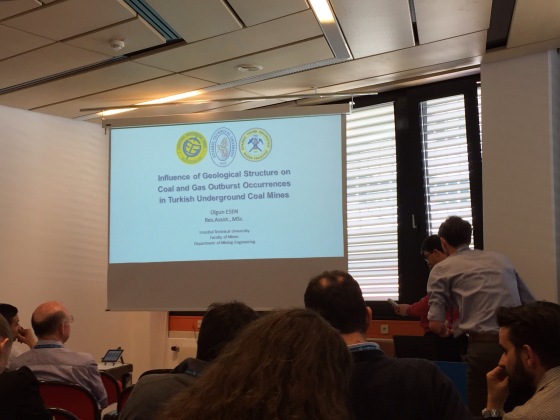 The afternoon was a bit more scrappy. I attended NH9.12 Modelling of dangerous phenomena and innovate techniques for hazard evaluation and risk mitigation and saw talks on rockfalls imaged by game engines, slope failure interpreted in 3D and coal and gas outbursts in Turkey. Similar to yesterday I felt that many of the scientists regarded the societal element as one more piece of data to be factored in statistically, and it would have been interesting to see a more considered approach. I also attended SSP4.2.5 Stratigraphic Palaeobiology: deep time to recent to watch a talk by Plymouth University staff member Uwe Balthasar on aragonite/calcite seas and biomineralisations. Finally I took a turn around the poster hall, but that is a post for next week!

The other thing about today was that I had a lot of great talks with people, notably Loïc Rossi (@AstroLR) about his work researching Venus, and it was so interesting so get some small insight into the struggles that scientists of otehr disciplines have. As an interdisciplinary student it is easy to feel marginalised and forgotten, that your struggles outweigh others’ because you are wrestling with two subjets that often don’t want to go together, but by speaking with other researchers you realise you are not alone, and although it doesn’t make your life any easier, it does make you feel more resilient to the process of being a researcher.

‘If others can do it, so can I’ is the way this feels. And it gives me a more positive mindset for the future.

What have you learned so far at EGU? Let me know below or on twitter @iamhazelgibson